I’ve been invited to say a few words to set the scene for tonight’s event.

The ‘dirty energy’ being referred to in the title of this event is fossil fuel: coal, oil and gas. Fossil fuel is ‘dirty energy’ because, well, it’s literally dirty! The height of the coal-burning era literally turned our cities and towns black! Large parts of the Midlands were called ‘The Black Country’ because, quite simply, it's thousands of chimneys belching coal smoke turned everything black! It was coal burning that created the great smogs of London that my father used to endure when he commuted to the City of London; these smogs killed thousands and wrecked people’s lungs. I remember as a very young child visiting London with my parents in the early 1960s, a few years after the Clean Air Act had been passed. London’s air had indeed become much cleaner, but the effects of decades of coal-burning had left its mark: London looked black, as most of its public buildings were covered in soot! As I grew up and made further trips to London, I remember vividly how London slowly emerged from its soot, as its' public buildings and monuments were sand-blasted clean! Seeing the yellowy-white Portland stone emerge from the soot was like seeing a city new-born, glowing golden in the sunshine as if for the first time!

Coal is still with us, and now oil and gas are fossil fuels that are even more prominent in our energy system. Oil and gas may not turn our buildings black, but they are ‘dirty’ in their own ways. In fact, the UK has some of the worst air pollution in Europe in our cities because of the pollution from car exhausts, especially from diesel engines. And most crucially of all, coal, oil and gas extraction and burning, release carbon emissions on such a scale that they disrupt the global climate system, causing rapid global warming and bringing us face to face with the very real threat of climate change that could have very harmful consequences for us all.

Our over-use of fossil fuels amounts, in Al Gore’s memorable phrase, to us “treating the atmosphere like an open sewer”. The UN IPCC reports issued last year summarise the scientific evidence that confirms that threat, and all nations that are signatories of the UN accept that evidence and the policy implications stemming from that. The main implication is that the world has to transition as quickly as possible from dependence upon fossil fuels and towards clean energy technologies, especially renewable energy technologies, in order to ensure a safe climate future for us all. This may well lead to strong global action at this year’s crucial UN climate talks in Paris in December, to ensure that carbon emission are quickly reduced over the next few decades. The chances of this happening is increased by the growing realisation that most of the world’s known fossil fuel reserves are now unburnable.

Mark Carney, the Governor of the Bank of England, acknowledges that it’s unburnable. It is unburnable because the scientists tell us that at least two thirds of all known fossil fuel reserves must remain in the ground, unextracted and unburnt, if the world is to stand any chance of avoiding runaway, and perhaps catastrophic, climate change. If the oil companies do not respond to this new reality, they will be stuck with stranded assets and investors. If they are smart enough, they will pull out of such companies, as well as out of the new fracking companies in the UK who are itching to sink their dark, satanic drills in England’s green and pleasant land. 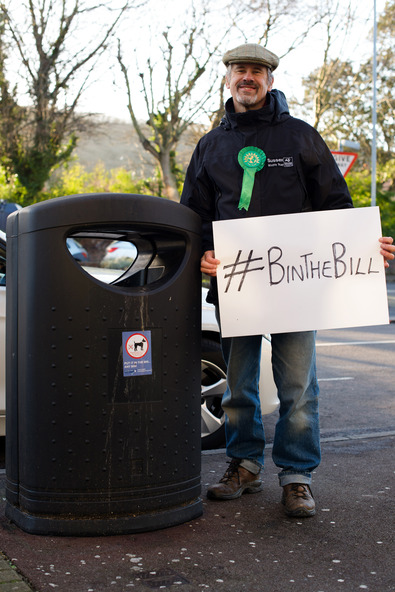 The smart money is already going into renewable energy technologies because they are the future. At the very moment that fossil fuel industries are entering the twilight of their years, the new energy frontier is where clean energy tech is taking off. The costs of wind and solar power, for example, are declining exponentially, while the returns on investment grow ever more attractive. So the clean energy revolution is happening, and happening fast, despite the competition from fossil fuels, but it needs to happen even faster if the threat of climate change is to be managed adequately.

What governments and politicians at all levels do can significantly help or hinder this revolution. Friends of the Earth, along with other civil society groups and many businesses, is trying to create the broadest base of support possible for ensuring the fastest possible transition to clean energy, and in this respect I’m pleased to say that there has been a growing consensus of support amongst politicians and council officials in Eastbourne for the Run on Sun campaign that Eastbourne & District Friends of the Earth launched last year. This project will help local schools, if they wish, to get solar PV installed on their roofs. This has helped us to engage with several local schools about the possibility of them developing solar installation projects.

Research has shown that each school can save up to £8,000 a year, every year, on their energy bills by installing solar PV, freeing up more money for their students’ education in these times of austerity.

Just as the challenge of climate change requires all of us to act collectively to deal with it, so the introduction of clean energy technologies needs cross-party political support to secure the future of clean energy: a future which can give such great environmental, social and economic benefits to us and our children, as well as helping to secure a safe climate future for us all.

Sussex is beginning to see a significant amount of renewable energy generation, with, for example, the Rampion offshore wind farm being developed off Newhaven, the go-ahead for the development of an onshore wind farm at Polegate, a new solar farm being built at Berwick, and an ever growing number of local houses with solar installations on their roofs.

What is even more exciting is that much of the development of renewable energy in Sussex, and in Eastbourne in particular, may in future years be pioneered by community energy co-operatives, which have a business model that can potentially maximise the economic benefits of renewable energy for local communities. I’m delighted that we’ll hear from Eastbourne Community Energy tonight to explain how community energy is emerging as a real game-changer in the energy market, offering a real alternative to the dominance of it by giant multinational corporations. I have the privilege of helping to make this community energy revolution happen locally, which is literally putting power into the hands of the people!

For me, the real opportunity of the clean energy revolution is that it gives us a precious opportunity to rethink our relationship to energy in general, to enable local people to create a much deeper engagement with it than was possible in the era of huge energy companies generating energy in centralised power stations. The empowerment of local people to invest in, generate, distribute, manage, and use energy at a local level, using the potential of local smart grids and peer-to-peer networks can play a vital role in revitalising local, and even national, democratic engagement in political and civic life.

Community energy can play a vital role in making all this happen, and if there is one thing I hope emerges from tonight more than anything else is that if each of us goes away with a better understanding of the concept of community energy and passes that understanding on to our friends, families and colleagues. Spreading that message will have huge value in helping people to see energy differently, and create a broader and deeper public understanding of how we can all benefit from the clean energy revolution, especially within our local communities.

Let's all be community leaders, showing the way to a cleaner energy future fair for all.