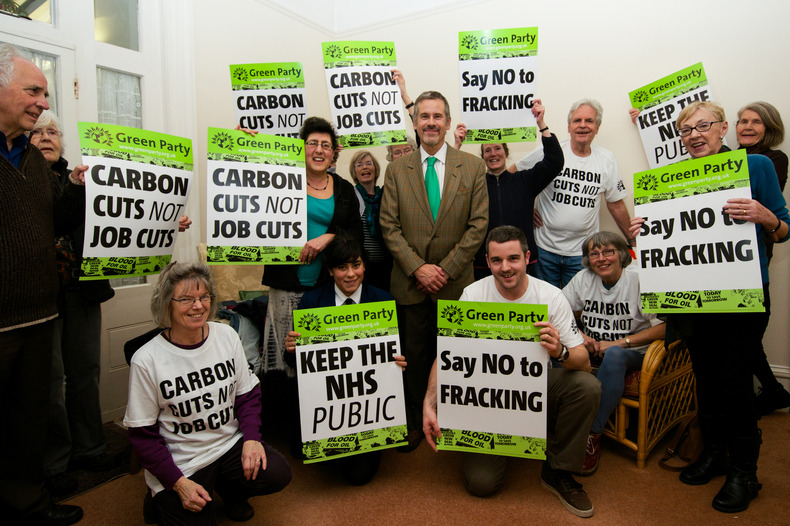 “We have a chance at this election to make people aware that there is a real alternative to the status quo, that our national politics don’t have to be the same old, stale, pantomime.

The Green Party is the only party standing up to austerity, calling it for what it is: an abject failure that creates more poverty, more hunger, more suffering for the vulnerable and the marginalised in our society.

What we need is a Green New Deal that puts people in real jobs with a living wage, doing the things that we need to do to keep people warm and well-fed in their own homes, creating resilience in our local economies by boosting local green businesses, and creating the infrastructure that we need to deal with climate change, such as creating much more renewable energy, creating more and better public transport with fares we can all afford, and improving our badly-maintained flood defences. What we don’t need is £15 billion of new roads, £45 billion wasted on subsidising new nuclear at Hinkley, splurging £80 billion on HS2 rail ,or spending £100 billion on Trident just so we can have a weapon of mass destruction to boast about!

We are also the only party that is totally committed to saving our NHS by rolling back the privatisation of it completely. The NHS is a common good, and should be run by the people, for the people. We’ll put people before profits and back the immediate reintroduction of an NHS Reinstatement Bill that will abolish the internal market within the NHS, abolish the failed Private Finance Initiatives that are loading NHS Trusts with crippling debts and abolish the obligatory tendering of health services to private contractors. Our beloved Eastbourne DGH will not ultimately be safe, and all its core services reinstated, unless the NHS itself is saved, properly funded, and properly supported, and the NHS will not be saved unless the profit motive is driven out of it, and that won’t happen unless our democracy is radically reformed so that big corporations and their lobbyists no longer have a stranglehold over our Parliament and our MPs.

Indeed, we need a new Magna Carta for our times, and the Green Party is calling for a People’s Constitutional Convention that will give all of us a say in how we should be governed. The Scottish referendum has blown the constitutional issue of English democracy wide open, and the clarion calls for democratic reform can no longer be denied.

The tectonic plates of the political system are shifting rapidly due to the breakdown of the dominance of the two-party political system where Labour and Conservatives share absolute power. The likely fall of the LibDems, as the kingmakers in this system, means that UK politics is rapidly becoming much more fluid and unpredictable. All this, coupled with the Green Surge and the flood of new members joining the Green Party, means that the time has come where the Green Party can make real breakthroughs and become a much bigger influence in British politics.

The first past the post voting system might mean that we are under-represented in Parliament, but our influence is far greater than what the number of MPs indicates. You only have to look at the huge and positive influence Caroline Lucas has had despite being the sole Green MP in Parliament! We are part of a much wider coalition of radical and green movements that are challenging the unaccountable, corporate-dominated Westminster elite that is strangling the life out of public services and our economy generally.

We are the only party taking climate change seriously. This is the crucial year. We are currently on course for catastrophic climate change unless we start right now, moving away from our dependency on fossil fuels as quickly as possible. That means no fracking anywhere in the UK. That means no more public subsidies for fossil fuel industries. That means divesting all public funds away from fossil fuel investments. That means pushing for a 100% zero carbon Britain by 2030 in which all electricity generation is 100% powered by renewable energies. It can be done, but it needs political will.

As that great climate campaigner Bill McKibben says, “Climate change is a test for us all, the test of our time on earth”. The Green Party is in the vanguard of those who are determined to meet that test. Eastbourne should meet that test too, by, for example, supporting grassroots community energy, food growing and recycling initiatives that reduce dependence on fossil fuels, while fostering social justice and community empowerment at the same time.

All our efforts during this election campaign are vital, and will make a difference to helping bring about the fundamental change that will inevitably occur in British politics.

The Green Party is the only truly progressive major political party left in British politics. We are progressive precisely because we have a positive vision for our country, which supports and nurtures the common good, for the sake of a future which is fair and safe for all.

I look forward to working with you to promote that positive vision over the next few months. Whatever each of us does matters, and every vote counts in bringing the Green Surge closer to changing Britain for the better.