The Green Party is now the fastest growing political party in England & Wales, with more members than either the Lib Dems or UKIP, and catching up fast with the Conservatives. We are polling equally with the Lib Dems and we have candidates standing in 95% of seats in England & Wales. We have an opportunity to gain millions more votes than in 2010, possibly gaining more Green MPs in Parliament to work alongside the inspirational Caroline Lucas, recently voted MP of the Year.

The Green Party is in an alliance with the SNP & Plaid Cymru that could be powerful enough to ensure that the next government will not be able to enforce yet more spending cuts upon our fellow citizens, who have suffered too much in the last 5 years.

A vote for the Green Party really is a vote for change, change which must come, now that so many people have been let down by the failed austerity policies of the Conservative/Lib Dem Coalition, austerity policies which Labour, unbelievably, will abide by, perhaps to a slightly lesser degree!

So, why is the Green Surge turning into a Green Spring? Because we are the only party that will stand up unequivocally for the Common Good. A Common Good which is all those things that we share in common and which we depend upon for the good life, whether that be good health care, good social care, good welfare benefits, a good economy that is fair for everybody, a good public transport system with fair bus and train fares, a good environment with clean air, water, and soils, or a good planetary home that is safe from the threat of catastrophic climate change impacting upon our children and grandchildren.

As a former professional nurse, I’m well aware that the NHS is the most precious part of the Common Good we all share, the greatest social achievement of you and your parent’s generation who fought and won the Second World War and successfully rebuilt Britain. Under the Conservative/Lib Dem Coalition Government, the NHS is withering away. This is entirely due to the top-down reorganisation of the NHS unleashed by David Cameron, a top-down reorganisation he promised many times before the last election would not happen.

The phrase ‘withering away’ is not my phrase but that of 140 top doctors who wrote a letter last week to the British Medical Journal, pinning the blame for the budget crises, chaos and fragmentation of the NHS on the disastrous impacts of the 2012 Health & Social Care Act. 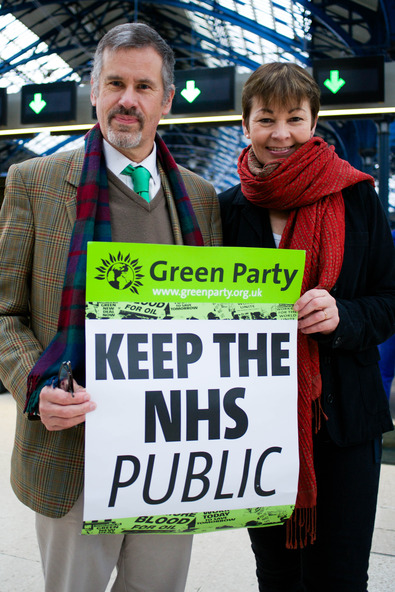 The Green Party is committed to scrapping that Act. Caroline Lucas has already presented the NHS Reinstatement Bill to Parliament, gaining cross party support for reintegrating the NHS and making it once again a properly-funded, properly-run, fully public service that serves only people, not profits. The profit motive has no place at all in health care!

If successful, the Reinstatament Bill will enable core medical services to be brought back to Eastbourne DGH, to get rid of its inadequate management and to make it the complete hospital it should be in a town as rapidly expanding, and ageing, as Eastbourne is.

Thousands of older people die from the cold every winter simply because they can’t afford to keep their homes warm. This is an affront to a civilised society, a moral stain upon the conscience of our nation. We in the Green Party say that we need to deal with this once and for all with bold and courageous new policies that care for older people, not cut the care they need.

We have committed to introducing a Citizens Pension, paid to all pensioners regardless of contribution record, so no pensioner will live in poverty. It will pay £180 per week to a single pensioner, £310 per week for a couple, and take all pensioners above the poverty line. We commit to providing free social care for all older people, funded by taxation like the NHS, injecting £10 billion immediately into local authority funding to reverse the social care cuts already made, ensuring that the new Social Care Act can be properly funded.

Our housing stock is the worst insulated in Western Europe, so our top priority is a national infrastructure programme to invest in the installation of free insulation into 9 million homes, creating 100,000 new decently-paid jobs in the next 5 years. This will raise tax revenues, reduce the deficit, reduce everybody’s fuel bills dramatically, and end fuel poverty. A win-win strategy if ever there was one! It would also reduce energy demand, thereby reducing fossil fuel burning, leading to fewer days of extreme air pollution like we had last Friday.

Please join me and vote for the Green Party on May 7th because fair is worth fighting for!