The front page of the Eastbourne Herald of 1 May claimed, on the basis of a cheeky letter left in the Treasury by a childish Labour official, that there was no money left when the Tories came into office in 2010. It looked like (out of date) headline news, but was in fact a 'wrap around' advert paid for by the Conservative Party. 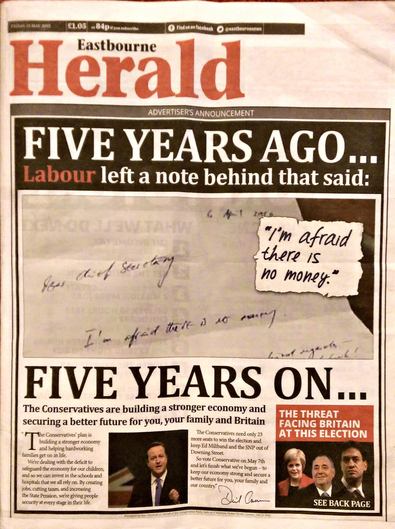 The fact that there was no money left is factually incorrect. If it had been true when the Conservative/Lib Dems came into power in 2010, then this coalition government would have had to apply for a bail-out from the IMF or the EU. It didn’t have to because the UK can create money through its own central bank and through its ability to raise credit cheaply through the issuance of government bonds.

Despite the national debt doubling since 2010, the Conservative led coalition Government has 'found' money to spend £3 billion on a top-down reorganisation of the NHS that has led to chaos and fragmentation, meaning it is now impossible to sack the management team of the Eastbourne DGH despite it receiving an ‘inadequate’ rating from the Care Quality Commission! It has also led, according 140 top doctors, to the ‘withering away’ of the NHS due to rapidly increasing privatisation of its services.

They also 'found' £2 billion to spend on trying to introduce Universal Credit, it's flagship welfare reform that was supposed to make work pay. It hasn’t worked and does not look likely to ever work, so the probability is that it will be quietly scrapped after the election, whoever wins!

Yet the Conservatives, and the Lib Dems, claim there is not enough money to pay decent welfare benefits to the old, poor, sick, disabled and vulnerable who need them. Which is why more than a million people in the UK now rely on foodbanks to avoid hunger. Which is why nearly a million older people are in acute poverty. Which is why 15,000 people died as a direct result of their homes being too cold last winter. Which is why one in four children are now growing up in poverty. Which is why half a million more families are now claiming housing benefits compared with 2010. Which is why 5 million people now earn less than the Living Wage and are dependent on in-work benefits to make ends meet. Yet the Conservatives want to reduce welfare benefits by a further £12 billion if they win the election! This is austerity on steroids!

After 5 years of the rich getting richer, while the poor get much poorer, making the UK’s inequality of income and wealth amongst the worst in the world, we have the choice at this election. The choice is to vote for more of the same from the Conservatives and the Lib Dems or to vote for the Green Party alternative of caring for our people once again by restoring the NHS as a fully public and properly funded service, free from privatisation. By reversing social care cuts and making social care free for all who need it. By scrapping student tuition fees and student debt so young people have the chance of a decent start in life. By creating a million new jobs in the green economy, ending fossil fuel subsidies and investing in clean energy and energy efficiency. By renationalising the railways and reducing bus and train fares. By investing in cycling and pedestrian infrastructure. By making the super-rich and the big corporations pay their fair share of tax. And by reforming our democracy to make it truly representative of how people vote. The Green Party has a fully-costed manifesto for achieving all this and much more in order to create a fairer, healthier, cleaner, safer society within the natural limits of the one planet we call home.

So the 'wrap around' cover bought by 'Tory HQ' at such high cost and with significant damage to the credibility and independence of the Eastbourne Herald, is a blatant attempt to deceive the Eastbourne electorate by diverting attention from the real issues of this election. It isn't a genuine news article as they hoped readers would think. It is scaremongering, thinly veiled as an 'advertisers announcement'.

It's not true that we have run out of money. There's plenty of money, but the wrong people have it. The bank bosses get richer with huge bonuses despite running failing businesses. The big corporations get richer by evading their fair share of tax through hiding their profits in tax havens protected by the City of London. The super-rich get richer, seeing their wealth double over the last 10 years.

The Conservative Party believe that placing adverts in local newspapers may help them win Eastbourne from the Lib Dems who have collaborated with them in harming the welfare of millions.

When challenged on the principles behind selling the paper's 'front cover', Gary Shipton, the Editor-in-Chief, has publicly stated that political advertisements are an important part of local democracy. Both Mr. Shipton and Laura Sonier, the Deputy Editor, state that:

"We did insist that the advertisement feature was clearly labelled as such, not least because the artwork provided to us had been given an 'editorial' look by the political party. In addition, we inserted a prominent article within the paper making clear that this was an advertisement and that its acceptance did not imply that we endorsed either the party or the message. We support no political party and remain proudly independent. I do hope you will continue to enjoy our newspaper every week. Our editorial coverage is always objective and free of any party political agenda".

My post on social media, raising the issue of objective editorial coverage versus advertising revenues at such a politically sensitive time, has now been seen by over 6000 people. It received over 50 comments, many locals saying how shocked they were by The Herald agreeing to carry the advert, others that they would no longer read or buy future editions.

Bizarrely, the response from The Herald's Editor-in-Chief, posted on the newspaper's website, was followed by another advert by the Conservatives . Needless to say, the advert has mysteriously disappeared, but not before we captured a screen shot... 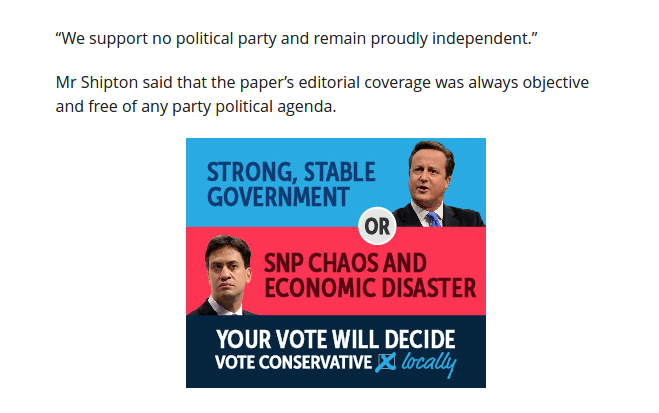 On 7 May, Eastbourne voters have the chance to vote Green and put an end to the machinations of both the Tories and the Lib Dems. To vote for the Lib Dems again in Eastbourne just means another Tory government in power if Nick Clegg again goes into a Coalition with them, which he says he may well do.

It is time to stop the Tories imposing even more unnecessary and cruel cuts in public services and welfare provision. Eastbourne voters can choose to support the Green Party - now the fastest growing political party in England - in starting a peaceful revolution to make Britain a fairer society. And, to clean up politics.