"The rating of Eastbourne DGH and Conquest Hospital as inadequate represents a shocking failure of senior management at these hospitals. This comes as no surprise to local residents and health service staff, who have been saying for years that things are going seriously wrong.

I fully support the Save the DGH campaign in calling for the immediate resignation of the Chief Executive of East Sussex Healthcare NHS Trust, Darren Greyson, and for the Health Overview and Scrutiny Committee of East Sussex County Council to meet as soon as possible in order to discuss the CQC inspection reports and review the committee's decision to back the transfer of core services from Eastbourne DGH to the Conquest Hospital.

Like other NHS facilities up and down the land that have failed CQC inspections, Eastbourne DGH and Conquest Hospital are the victims of a botched, chaotic, and ideologically-driven top-down reorganisation of the NHS, initiated by the Conservative/Liberal Democrat Coalition Government, a reorganisation they promised before the 2010 election would never happen. Their Health and Social Care Act 2012 has helped create a profound disconnect between health service management and the local populations and staff the management should serve.

The NHS Reinstatement Bill, presented to Parliament in March 2015 by Caroline Lucas, Green Party MP, will roll back NHS privatization and reinstate the founding NHS principles of being truly public, fully protected and free at the point of delivery. The Bill will halt the creeping privatization of public health services and strip away the costly market mechanism, wasting NHS money that should be spent on patient care.

I, and my Green Party colleagues, will work to rebuild the NHS as a truly public service that serves people, not profiteers, and works solely for the common good". 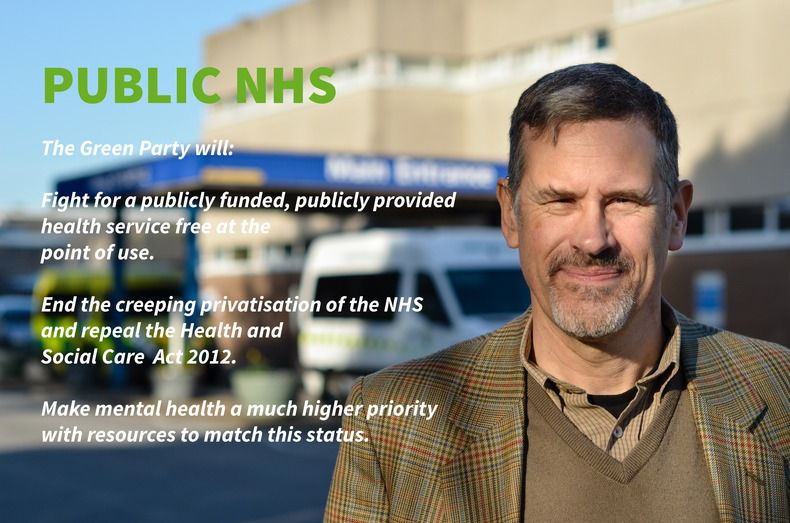 The recently published Care Quality Commission (CQC) inspection report has rated Eastbourne DGH, Conquest Hospital, and the East Sussex Healthcare NHS Trust that runs both hospitals, as 'inadequate'. It reveals a failure of management, which is so severe that there are cross-party calls for the Chief Executive of the Trust, Darren Greyson, to resign immediately.

The CQC inspection report reveals that the Trust ignored the concerns of both the local population it serves, and the staff working within it. This refusal to listen to local concerns, especially those raised by the Save the DGH campaign group about the relocation of core services from Eastbourne DGH to the Conquest Hospital, has been exacerbated by the top-down reorganisation of the NHS, facilitated by the Health and Social Care Act 2012.

The Conservative/Liberal Democrat Coalition Government’s Health and Social Care Act 2012 has fatally weakened the ability of patients, local residents and health service staff to be consulted properly by health service organisations. This has led to a fundamental lack of democratic accountability of our local NHS. The Act has absolved the Secretary of State for Health from their responsibility for the provision of a protected, truly public health service and in having to intervene in cases like this.

The CQC inspection reveals that resources and staffing levels in several departments of both the Eastbourne DGH and the Conquest Hospital were so low as to make those areas unsafe. This cannot be fixed just by changing the management.

It is telling that the Trust was in deficit to the tune of £23 million at the time of the inspection, so the Trust will need a significant injection of funding to ensure that resources and staffing levels can be increased to safe levels again. This will require a reversal of the budget squeezes that have been imposed on the NHS over the last 5 years, squeezes that have meant the NHS has not been able to keep up with a rapidly rising, and ageing, population.

The chaotic and financially wasteful fragmentation of the NHS can only be reversed fully by the NHS Reinstatement Bill, recently introduced to Parliament by the Green Party MP, Caroline Lucas, with support from many MPs in the House of Commons.

The Green Party is the only political party wholly committed to making this bill become law.